Roffaswing backed a great project and donated the transcription of a song for the Big Band Revival: Chick Webb Transcription. There were so many songs and they are all great! This kickstarter campaign is a great succes, when we jumped in, seven songs were left. Roffaswing submitted a top 3 and snatched up Don’t Be That Way.
Thank you co-contributors Alexandra, Didi, Finn, Heidi, Iris, Jakob, Lennke, Marike, Pauline, Sarah Marijn, Yuen Han and Zoë!

Don’t Be That Way was wirtten by Edgar Sampson in 1933 when he was playing with Rex Stewart’s band. Rex Stewart did not record the song, but when Edgar Sampson joined Chick Webb’s band soon after that, the song was recorded for the Decca label on November 19, 1934. Edgar Sampson was not only responsible for the arrangement but he also played alto sax on this recording. He wrote more hit songs for Chick Webb like Stompin’ at the Savoy, Blue Lou, If Dreams Come True and Blue Minor.

Sampson sold  his arrangements of Stompin’ at the Savoy and If Dreams Come True to Benny Goodman in 1936. The Benny Goodman Orchestra scored a big hit with their 1936 version of Stompin at the Savoy. The same goes for Don’t Be That Way that Goodman recorded in 1938 and several times after that. These songs are considered amongst the biggest hits of the swing era.

Many drummers have been inspired and influenced by Chick Webb, and that certainly is true for Gene Krupa, Goodman’s drummer at the time. Midway the 1930s Benny Goodman became a nationwide superstar and was called the King of Swing. Meanwhile in Harlem, Chick Webb’s band ruled as houseband of the Savoy, where all the famous lindy hoppers danced their socks off to Chick Webb’s music. Chick Webb was their Kng of Swing. 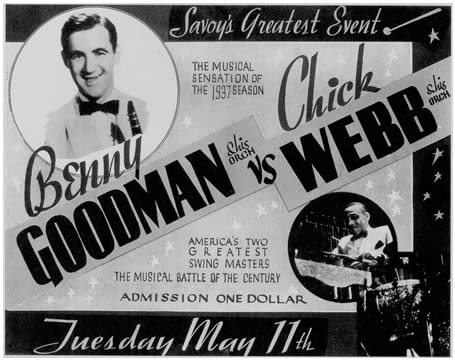 The Savoy had regular Battle of the Bands where swing bands competed with Chick Webb's Orechstra. On May 11, 1937 the Benny Goodman Orchestra came to the Savoy to battle Chick Webb’s Orchestra. Thousands of people witnessed the  Chick Webb's Orchestra winning that night. Gene Krupa took a bow for Chick Webb and said about their defeat: 'Chick Webb had cut me to ribbons.'

Original Lindy Hoppers Norma Miller and Frankie Manning remembered that epic night vividly and told about it in Jazz by Ken Burns.

At the historic and legendary Carnegie Hall Concert in 1938 of Benny Goodman’s Orchestra, the band opened with Don’t Be That Way. The story goes it was in honour to Chick Webb and Edgar Sampson.

When Edgar Sampson was asked what his favorite version of Don’t Be That Way was, he replied: “Musically, I prefer Chick’s. Financially, I prefer Benny’s!”

The song has been recorded and played by many more artists since 1934 that and it is a big favourite of Roffaswing DJs.

The Indiegogo campaign promises that the new transcription of Don’t Be That Way will be playd first at Lindy Focus at the end of 2016. The backers of songs will be announced live. How cool is that?! Do you want to chip in a bit as well? Find out all about Roffaswing’s contribution here.